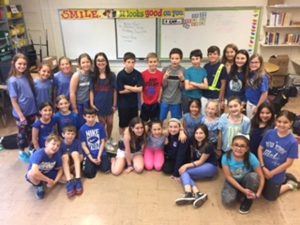 PURCHASE, NY – Purchase Elementary School announced that its Caring Kids Club raised more than $600 from its “Wear Blue Day,” which was held on June 2 as part of a fundraising campaign to fight cancer.

That day, students arrived at Purchase Elementary and “turned the school into a sea of blue,” the school noted.

Blue was chosen to wear because it is the “signature color” of the Pediatric Cancer Foundation (PCF), the school noted.

“They asked the entire school to wear PCF’s signature color blue and to bring in a dollar or two,” a recap from the school stated. “They not only raised crucial funds for pediatric cancer research but they helped to promote awareness of this devastating disease.”

The money collected is part of a broader fundraising campaign to help the PCF; according to the school, more than $4,000 has been raised in total.