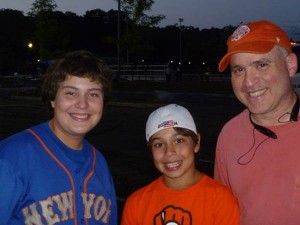 From left, Evan, Joshua and Ken Greenberg at the Celebrity All-Star Softball Game in New Rochelle at Flower Park Wednesday.

MAMARONECK, N.Y. – With eight years of business acumen under his knapsack, Larchmont’s Evan Greenberg, 13, did not hesitate to go up to a gaggle of celebrities at the annual Celebrity All-Star Softball Game in New Rochelle and try to make a deal. 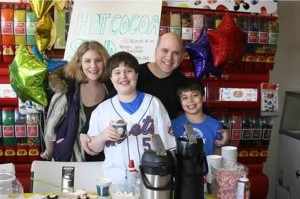 Fresh off his bar mitzvah, Greenberg asked WFAN sports radio host Craig Carton to offer a raffle prize for his annual Hot Cocoa Stand, which raised $4,500 this past February and $14,000 in the last eight years.

Yes, Greenberg had the idea for his Cocoa Stand at just five years of age, which his mother and father then organized into an event. Greenberg has been running it with his little brother, Joshua.

“I decorated a cardboard box to get ready to hand it out at school, and my parents talked to me about doing it out of our garage and giving the money to Oxfam,” he said.

Carton, who co-hosts the “Boomer & Carton Show” on WFAN, was in his hometown of New Rochelle Wednesday, Aug. 13, for the annual softball game, which was his idea. After Greenberg told Carton about his Cocoa Stand – proving its validity by showing Carton a Daily Voice article on it from January, using his phone – the talk show host agreed to offer a prize.

A raffle winner will get to attend the “Boomer & Carton Show” in the city and then have lunch with Carton.

Some may have stopped there, but Greenberg then approached former “American Idol” contestant and star of Broadway’s “Rock of Ages,” Constantine Maroulis, who agreed to help. Evan’s father, Ken, said the rock star wasn’t specific, but that it will likely be something related to Broadway.

In past years the Greenbergs have raffled off signed memorabilia and tickets from the New York Mets, Yankees, Jets, Giants and Devils. In addition to Oxfam, the proceeds have benefited the Larchmont Food Pantry and the Pediatric Cancer Foundation.

The annual Cocoa Stand has been held at All Good Things in Scarsdale for the last three years, which Greenberg’s father, Ken, said he hopes continues in 2015. For the first five years, they sold hot cocoa out of their garage.