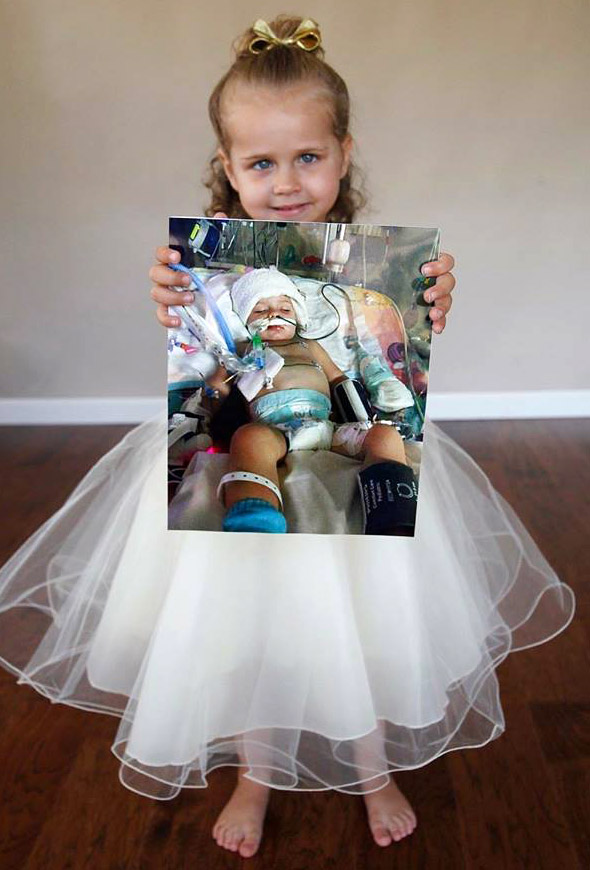 2016 started out like any other year. Winding down from the holidays and dreaming of warmer weather. Slowly but surely April 2016 brought us that sunshine we had been craving and we were spending our days playing outside and getting ready to plant flowers soon. Life was good. During the third week in April, my youngest daughter Hayden threw up a couple times right before bed. I didn’t think much about it. I figured she had a little stomach bug or something and went about our days.

April 23rd, 2016 is the day my life was forever changed. It’s the day my life came crashing down around me. That morning Hayden woke up and was terribly off balance. I picked her up out of her crib and set her down on the floor and she fell over. I picked her up and noticed to was walking crooked until she would eventually fall down. I immediately figured she must have a bad ear infection and her equilibrium was off. I also assumed that was what had caused her to get sick that week as well. I took her into the walk in clinic where they couldn’t find anything wrong. Her ears looked good. No fever, no other symptoms. They sent us home with instructions to come back in a few days if she wasn’t better. I went home, laid her down for a nap and tried to fight the growing fear in the pit of my stomach. Something didn’t feel right.

The doctor said nothing was wrong. But that uneasiness just grew over the next hour and I called my husband to see what his thoughts were. He agreed with me something felt wrong. We decided to take her into the ER if her balance was still bad when she woke up. It was bad, in fact worse. We went to the ER where the doctors looked her over, did blood work, and again, had no explanation for why her balance was so bad. After a lot of deliberation, we asked for them to do a CT scan. After the scan, the doctor walked in with a grim look on her face. She informed us that they really did not expect to find anything but Hayden had hydrocephalus, or basically fluid on her brain. They put us in an ambulance and sent us to the University of Iowa hospital. Within about half an hour a neurosurgeon came in and told us that my baby, my perfect little girl has a mass on her brain stem.

The emotions I went through over the next 48 hours were unimaginable. I was so angry. I was in denial. She was fine just a couple days ago. This stuff doesn’t just happen… but it did. Hayden had surgery on April 26th. The memory of the anesthesiologists taking her out of my arms that morning will haunt me forever as they carried my 19 month old baby down the hall away from me, screaming mommy, not knowing if I would ever see her alive again. The tumor was in a very dangerous location. It was right on the part of her brain that controls your heart rate, breathing, temperature, etc.

The surgery lasted just under 7 hours. The surgeons came in and told us the surgery had gone great, better that expected. They believed they got the tumor almost completely out. We were overjoyed. But this was only temporary. When we were finally able to see her, we knew something wasn’t right. She was thrashing and moaning and uncontrollable. They kept reassuring us this was “expected.” In the early hours of the day following her surgery, Hayden went into cardiac arrest. The alarms went off and nurses and doctors came running from every direction. As they were doing CPR on her, my husband and I were pulled out of the room to stand back and watch. It was horrifying. They thankfully got her stabilized and it was discovered she had developed something called Pulmonary Edema. This meant that she had an excess of fluid in her little body and her lungs could not inflate to the extent they needed to and her heart was working much harder than it should because it was wet.

Late that same evening Eric and I finally fell asleep for the first time in 3 days. We woke up to people yelling for Hayden to breathe. When I opened my eyes I saw that the respiratory therapist had Hayden bagged and was attempting to breathe for her without any luck. Again, people started swarming our room. We were then told that Hayden was extremely critical. They were going to place some tubes into her chest to try to help her breathe. When they did this, her lungs collapsed. They brought us into the room and told us we needed to say anything we needed to as they were losing her fast. There was one last, very dangerous option that was not expected to be successful, but it was our only choice. They wanted to place her on ECMO life support. In order to do this, she had to be placed on blood thinners, which was a very risky decision as she had just had major brain surgery and would most likely have a brain bleed and die. That night I have never felt so helpless and terrified. I was sure I was going to lose her. After three hours of having dangerously low oxygen, the surgeons successfully put her on ECMO in her hospital room in the PICU. She was too critical that they couldn’t even get her to the operating room.

I’ll never forget when the room, which probably had about 40 doctors and nurses working on her, screamed for joy when her oxygen slowly came back up. The next day after such a horrific night, we were pulled aside and told that the biopsy of the tumor was in and it was malignant. Brain cancer. Anaplastic Ependymoma. A very rare brain cancer that doesn’t have a ton of information on how to effectively treat it. Her fight had just begun. To everyone’s disbelief, Hayden was able to successfully come off life support just 36 hours after being placed on it. We noticed shortly after she woke up from the medically induced coma that something was wrong. She wasn’t moving the left side of her body. A later MRI confirmed what we had feared. Hayden had a very substantial stroke. Her recovery from there was slow. It always seemed to be 3 steps forward and two steps back. She was recovering from so much trauma. She had lost the ability to swallow, she didn’t breathe enough times per minute, she lost her ability to walk and talk. And she hadn’t even begun to fight her biggest battle.

A month later, it was decided that she needed to start treatment. 33 radiation sessions, all of which she would have to be completely sedated for and 4 rounds of high dose chemotherapy. Radiation went by fairly easy with the exception of breathing issues when they had to sedate her daily. Chemotherapy was another story. Hayden was very sick every single round and had infections every time due to her immune system being nonexistent. We spent the majority of the time inpatient at the hospital under close observation. They even cut back some of her chemotherapy on the last dose as they were afraid it could kill her.

After 8 terrible, long, horrific months, an MRI confirmed Hayden was in Remission on December 13th, 2016. Hayden still has an uphill battle to fight but she does it every day with a smile on her face. She didn’t walk for over a year but took her first real steps in June 2017. She continues to do a lot of physical therapy and speech therapy weekly. She has MRI’s and a barrage of other tests every 4 months to watch for recurrence. Her cancer has a high recurrence rate so they will monitor her closely for 10 years. The stroke may have slowed her down but definitely hasn’t slowed her determination to continue to improve. She went through something no one should ever have to endure, especially a child. She has more strength and determination that anyone I know. She even attended preschool this year and does tumbling classes! Cancer broke me. Life will never be the same. Life will never be easy or carefree. I will live in some form of this nightmare for the rest of my life. But cancer taught me a few things as well. It taught me how important every moment is. How to let little things go and forgive quickly. And to love hard. Tomorrow is never promised. It doesn’t matter if you are 70 or just 19 months old. Your life can be over in the blink of an eye so don’t take anything for granted.

This is Hayden’s story told by me, her mother, Nicole Wheatley.

Thank you for bringing awareness to this cause.